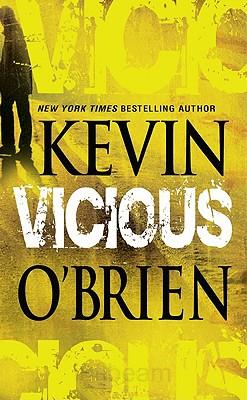 For more than two years, he held Seattle in a terror grip. A cold-blooded killer who abducted young mothers right in front of their sons and murdered them execution style. Then, as suddenly as the killings began, they seemed to stop.

Susan Blanchette is looking forward to a relaxing weekend getaway with her fiance, Allen, and young son, Matthew. But something about the remote lake house doesn’t feel right. A woman vanished from the area a year ago, and now Susan thinks she’s spotted someone lurking around the property. And when Allen disappears, her fear grows…

A psychopath has returned, ready to strike again. Someone who can’t resist the urge to kill, who derives pleasure from others’ pain, and who is drawing nearer to Susan as each minute of the weekend ticks by. But she’s just one pawn at the heart of a killer’s deadly game. A killer who is unrelenting, unstoppable, and absolutely vicious…

Vicious was recommended to me by a close friend who has never really taken a keen interest in reading. When she told me about this amazing murder thriller she was reading, and how she was hooked, I had to read it. Anything that gets her reading is something to be commended. Being that I work in a bookstore, I was familiar with Kevin O’Brien’s name, but I had never read any of his books before.

The story follows that of Susan Blanchette, who is going to Cullen, outside Seattle, to a cabin her fiance Allen has rented for the weekend. On the trip there, she meets a strange man who is too friendly, and a group of shifty teenagers. One by one, their fates are entwined as they become caught up in the web of Seattle’s serial killer Mama’s Boy, who kills young mothers but leaves their sons unharmed.

The story of Mama’s Boy and his involvement in the lives of Susan, her son Mattie, the man Tom Collins (like the drink) and the teenagers Jordan, Leo, and Moira, is fascinating. Each plot turn keeps the reader on their toes. At one point I was convinced I knew who Mama’s Boy was, and when I found out the real identity I was stunned. O’Brien plotted everything to minute detail and executed it perfectly.

O’Brien did a lot of telling instead of showing. Immediately after introducing a character, he would launch into a paragraphs-long description about their physical appearance, their history, their personality. At one point, when describing a certain tragedy that happened to Susan and Mattie two years before, I forgot for a moment that we were in a flashback sequence because it lasted for several pages. It was important to the plot, I think, but not so relevant that it had to go on as long as it did.

I quite enjoyed Vicious, and am definitely going to get more of Kevin O’Brien’s books. I haven’t read many thrillers before, so I think this was a good foray into the genre. If you haven’t read any or many, and want to start, I definitely recommend Vicious.

Vicious gets four of five stars. I devoured this book. I recommend you all read it.