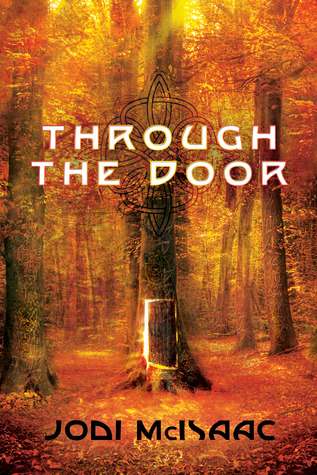 Celtic mythology and the modern world collide in Through the Door, the first book in the new urban fantasy series The Thin Veil.

Cedar McLeod lives an ordinary but lonely life, raising her six-year-old daughter Eden on her own while trying to balance the demands of her career and the expectations of her mother. Everything seems normal until the day Eden opens her bedroom door and finds herself half a world away – and then goes missing. Suddenly, Cedar realizes her daughter is anything but normal.

In a desperate search for answers, Cedar tries to track down Eden’s father, who mysteriously disappeared from her life before Eden was born. What she discovers is far beyond anything she could have imagined. As she joins unlikely allies in the hunt for her daughter, Cedar finds herself torn between two worlds: the one she thought she knew, and one where ancient myths are real, the stakes are impossibly high, and only the deepest love will survive.

Facebook was actually the one to recommend this book to me, by advertising along the sidebar telling me that it was similar to my favourite book in the whole world and beyond, Outlander by Diana Gabaldon. High praise indeed, so I clicked the link and decided to wait until the day came that I would own a Kindle. Then I would buy it and revel in Celtic lore. This is something that has always fascinated me, partially because of my love for history, partially from Outlander, and partially because I’m Celtic (my father was born in Wales). The other day, in order to test how Purity looked in format, I downloaded the free Kindle app to my smartphone. I remembered how I wanted to read Through the Door, and here we are. I read it in about two days.

Through the Door follows the story of Cedar McLeod, who is an ordinary woman from Halifax only trying to be happy. When she finds out she’s pregnant, she is anxious to tell her baby daddy, Finn, the good news. But before she can even get the words out, he vanishes from her life without a word. Fast forward seven years, and their daughter, Eden, is coming into some very strange powers, and these powers get her into trouble when she vanishes. In order to explain the inexplicable, Cedar hunts down Finn’s family and finds herself in a world beyond imagining.

The Celtic mythology is obviously very well researched, and some of the common Irish terms used are translated in-story for easier flow of reading. Much of the plot revolves around Cedar trying to find her daughter, and her panic is believable. The characters are well-rounded and interesting – especially Finn, who is charming and fascinating without being the quintessential “perfect” male love interest. Even his family is interesting – his father starts out as a bit of a hard-ass, but as the story progresses, the reader finds out just why Rohan behaves the way he does.

Some of the pronunciations weren’t that clear, which is really not that big of a deal – I don’t specify how strange words are pronounced in Purity, as I only kind of know how to pronounce them myself, and I don’t want to butcher the language. The ending seemed just a little rush, but it wasn’t disappointing in the least.

I seriously enjoyed reading this book, and I’ve already preordered the next one. I am so ready for this story to continue.

Through the Door can be found here on Amazon in several formats, including the Kindle format I got my paws on, and a print option. Maybe go buy it and fall in love the same as I did.