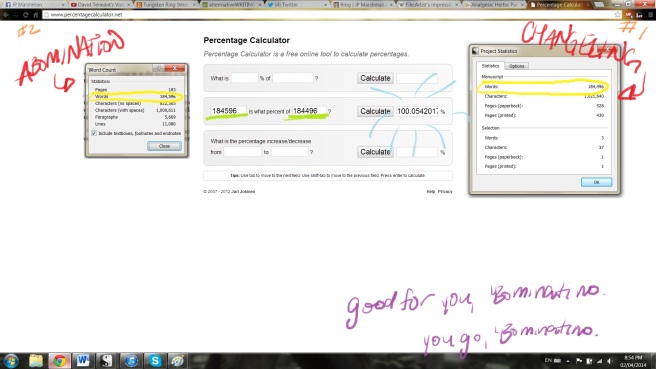 And now, an update on the many projects I’m working on!

Now, Changeling has been finished for a long time now, and I’ve already gone through and edited it once. But I’ve just sent out copies to beta readers, so the second round of edits will be starting shortly. I’m also in the process of organizing a photo shoot with an old friend and photographer, and my friend and beta reader Lexi, to start creating a cover for it, so she can be sold online!

Abomination, as can be seen from the above picture, has surpassed Changeling, its predecessor, in word count. I always had a hunch this would happen, and now it finally has! I’m actually very excited about this, because it means that ‘Bominatino is getting close to the climax. Plots are being brought together now, and others are being opened for the next in the series, thus far titled Usurper. Though I have had Lexi beta reading ‘Bominatino since I started, I will be going through a round of edits fairly soon, and will need more readers once I begin.

“After the tremors began to shake buildings from their foundations, the sky split and the mountain burst.

“Black snow belched from the crater atop the mountain and covered the city in dust. Molten fire and rock came next, and melted everything in its path. We could do nothing but watch the city burn, watch as the river of fire came closer and closer and finally consumed all.

“For countless aeons after I swam in empty blackness, unable to move or speak or do anything but listen to the final cries of my people as they drowned in ash and flame. Until the day you came along, magus,” Mirek Ko’shul, the King of Ghosts, murmured, and his dark eyes fell on Leto, “and the power you carry in your soul, so like my own, woke the curse in all of us.”

The quote above is a story told to the main characters by a ghost of a long dead king, explaining the final days of his people. This is a vital point for them, to solving the mysteries that have plagued them for so long.

The rewrite of my first true foray into epic fantasy started out strong and then petered out. Today, I came to the realization that nothing is really stopping it from continuing but me, and I did mange to finish off the last chapter I was working on and start the next.

“Sure, armour is lovely, but all I have to defend myself with is a battered old longsword and a half-finished bow. And a penknife. I could probably stick a man in the throat with it, but it seems like a one-use item to me.”

A shadow loomed over them, and Sage grinned sweetly at the owner. “Sage,” Kilra growled, “get armour.”

He let out an explosive sigh. “I don’t have the money for armour.”

“And here I thought by gettin’ Rowan to tell ye, you’d actually listen to me.” Kilra nodded to Rowan, huddled next to Sage’s elbow. “Thanks anyways, Rowan. Now, Sage, the money isn’t a problem. The Sons have a deal with wee Rory here. Ye pay him when ye do have the money. Ye need armour. A dagger comes second. Besides,” he added, grabbing Sage’s shoulder and towing him to the caravan nearby, “a penknife is an excellent hidden weapon if ye need it. Just be sure to stick him where it’ll do the most damage.”

I really like the way Kilra’s character is going so far. Sage needed more male friends as it was – all those in the original write all got killed off fairly soon, or ended up trying to kill him. He needs fewer ladies in his life . I’m still working on fresh plot, stuff that never happened in the original draft. A few more chapters detailing Sage’s life as a mercenary, and then shit will get back on track and start to get real.

My sci-fi adventure, though not nearly as important as my fantasy , went strong for a good while there, and it was all I focussed on. Though she’s on the back-burner for now as I work on ‘Bominatino and OtArb, she’s still important when I’m feeling that sciencey, spacey vibe. She’s a space opera, if I hadn’t said as much before, with FTL (faster than light) technology and alien races. Think Star Trek or Mass Effect. I love it so far, but again, not nearly as important as fantasy.

The silence was suffocating, and it felt like an age passed before something finally happened.

A little figure pushed through the crowd. It was a small crajril boy, his jaw ridges swollen by the throes of early puberty, he gaped up at Alison, his dark eyes wide and pupils huge.

“You’re Alison Vaughn,” he whispered, though with his accent it sounded more like Ah-lee-sawn, much like how Lahja said it.

Almost as soon as the words left his mouth, chaos erupted inside Phanox Technologies.

The room was suddenly a mass of limbs, all reaching and flailing and swiping. The VI’s voice was drowned out entirely by accents shrieking Alison’s name and the name of her ship. The employees of the store were quick to move when the customers began surging forward, screaming for autographs and voice prints of the heroes. Alison pushed ahead of Gher and M’Jin, keeping them close behind her back so they could use her body as a shield. Soon, figures in black armour emerged from a rear door, and security guards began pushing through the crowd, forcing them back. The chants of her name were spiked through with screams as one of the guards knocked over a customer; somebody dropped to help her, and the surging mass began to back off, edged back by men in black armour.

I hope to have ‘Bominatino finished in the next few months, and edited at least once. In the meantime, I’m going to edit Changeling again, have others edit as well, and prepare a cover. I hope I can get her released at least this summer or fall. She’s my baby – and I’m so excited for others to have a chance to read her as well!