PURITY will be released as a print on demand in the near future.

So you’ll be able to hold that sucker in your actual hands.

PURITY is on sale until the end of August!

Head on over to the book page on Smashwords, and use the code FV24T to get 30% off.

Tell yo neighbours, tell yo friends.

Sorry I’ve been missing for the past month or so. It’s been a crazy few weeks. First, James came home from work after a month in Nunavut, and I usually miss the internet for a while when he’s home.  Plus, while he was home, I moved. Jumped from my amazing basement suite with my amazing landlords, into the townhouse where James lives. So now we’re living together! How thrilling.

Now that he’s back to work, I’ve been busy working and organizing the house. On top of that, my best friend is getting married on Saturday and I’m a bridesmaid. Last minute preparations are insane.

I’ve also been rereading my favourite series, Outlander by Diana Gabaldon, in preparation to read the eighth book in the series that came out earlier in June. In the past few weeks I’ve read five and a half monster sized books. Maybe I’ll do a review of the first, just to stick something in here.

And! I’m holding another contest on my Facebook page for a free copy of my book, PURITY. Pop on over and check it out 😀

But don’t fear! I have another contest starting today!

And you’ll find this photo. That’s the contest entry. All you have to do is like and comment on the photo to be entered. Sharing gets you a second entry.  The winner will receive a FREE copy of my novel PURITY from Smashwords in the format of their choice. My only stipulation is that they review when they’re finished reading.

The winner will be drawn at random in a week, so get you entries in and good luck!

I’m working on getting ready a print on demand template for my novel, PURITY, so people can have it in their hands as well as on their electronics. I don’t know exactly how long this will take or how much it will end up costing to buy these, but it will be an option in the future, nonetheless. I’m very excited about it, and I’ll keep you all updated 😀

As well, just a reminder that my Twitter contest is still going. The person who is my one hundredth follower will get a free copy of my book, PURITY.

Time for a giveaway!

Once I’m there, I’m offering a free copy of my novel, PURITY, to whomever is follower 100!

And now, an update on the many projects I’m working on!

Now, Changeling has been finished for a long time now, and I’ve already gone through and edited it once. But I’ve just sent out copies to beta readers, so the second round of edits will be starting shortly. I’m also in the process of organizing a photo shoot with an old friend and photographer, and my friend and beta reader Lexi, to start creating a cover for it, so she can be sold online!

Abomination, as can be seen from the above picture, has surpassed Changeling, its predecessor, in word count. I always had a hunch this would happen, and now it finally has! I’m actually very excited about this, because it means that ‘Bominatino is getting close to the climax. Plots are being brought together now, and others are being opened for the next in the series, thus far titled Usurper. Though I have had Lexi beta reading ‘Bominatino since I started, I will be going through a round of edits fairly soon, and will need more readers once I begin.

“After the tremors began to shake buildings from their foundations, the sky split and the mountain burst.

“Black snow belched from the crater atop the mountain and covered the city in dust. Molten fire and rock came next, and melted everything in its path. We could do nothing but watch the city burn, watch as the river of fire came closer and closer and finally consumed all.

“For countless aeons after I swam in empty blackness, unable to move or speak or do anything but listen to the final cries of my people as they drowned in ash and flame. Until the day you came along, magus,” Mirek Ko’shul, the King of Ghosts, murmured, and his dark eyes fell on Leto, “and the power you carry in your soul, so like my own, woke the curse in all of us.”

The quote above is a story told to the main characters by a ghost of a long dead king, explaining the final days of his people. This is a vital point for them, to solving the mysteries that have plagued them for so long. END_OF_DOCUMENT_TOKEN_TO_BE_REPLACED

PURITY is now for sale – everywhere!

I know, I know, shut up, Jessica. This will be the last PURITY related post for a little while, I promise .

In any case, this is news that warrants a new post.

PURITY is now available on Barnes & Noble Nook for only $4.99!

PURITY is now available on Apple Books for only $4.99! 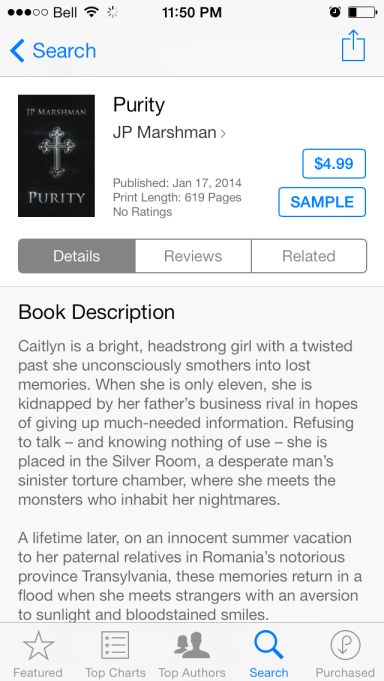 So all this means that PURITY is pretty well finished, save for maybe a few updates here or there if I find any outstanding typos or mishaps while reading through once more myself. Maybe I’ll put a teaser or two up in the future, once she’s had time to hang out online and make herself known.

I’m so proud that I’ve been able to do this, to achieve my childhood dream of publishing a book for everyone to read. And I’m so thankful for those people who have made it possible for me. I’m truly blessed to have this opportunity.

And I hope you all enjoy Purity as much as I do.

My spirit suddenly trembled, and for just a moment I thought my hold on the owl body would break. Nearby, the harpy eagle body that was Eleri let out a mournful wail that even the wind could not swallow. Though the dragon below me did not falter, I knew Mama had felt it as well; her sprit shivered loud enough for me to hear it, to feel it within myself.

I recovered, head spinning. What was that?

The dragon screamed, and Mama answered, I don’t know. Stay close to Eleri, just in—

Then it came again, before she had a chance to finish.

It was pain that I could never have imagined—pain that stabbed my heart and burned my bones. My vision blackened; I no longer felt the glacial wind ruffling through my feathers.

And then it happened.

With as much warning as a hiccup in time, I was thrown from my false body.

For just a moment, we were suspended in time, and I could see everything with such perfect clarity.

Eleri had been pushed back into her body; her long hair streamed behind her as she fell like the licking tendrils of a fire’s shadow. Mama still wore her dragon skin, but her wings had gone limp; Morwenna was little more than a blotch of polished copper amidst bronze scales and a flat grey sky.

In the moment before time resumed, the whole world was quiet, and realization slowly crushed me—

I was trying to fly on clipped wings. END_OF_DOCUMENT_TOKEN_TO_BE_REPLACED

PURITY is now for sale on Smashwords!

Not to keep tooting my own horn , but here’s yet another post about PURITY. I’m sure everyone wants me to shut up at this point, but hush, I have words.

PURITY is now (finally) for sale at Smashwords, though we’re still waiting shipment to their premium catalogue, so it isn’t ready for Apple, Barnes & Noble, Kobo, etc, just yet. Now that I know what I’m doing when it comes to Smashwords formatting (which is a lot more difficult than formatting for Amazone, let me tell you), it won’t take nearly so long to get the next book I publish out into the vast world of the interwebz.

I’ll keep you all informed as to when the premium catalogue gets accepted and shipped and actually in the webstores.

And don’t forget either,

DISCLAIMER: The formatting for Smashwords forced me to change some of the accented words that gave PURITY some of its Old World flair. I use a few foreign words and phrases, because the majority of the story takes place in Romania. These foreign accents didn’t translate well into the Smashwords format, and I was forced to change them. For example: Ţepeş became Tepes, strigoi morţi became strigoi morti, Braşov became Brasov. It takes the charm out of it for me. That all being said, if you want to keep that aforementioned Old World flair, purchase the AMAZON copy. If you don’t give a single fuck, by all means, go ahead to SMASHWORDS.

I’ll have a real post soon enough, I promise.